Thank you for your patience while we retrieve your images.

Visitors 106
Modified 29-May-20
Created 26-Aug-13
33 photos
A young eagle was returned to Middle Bass Island and released around 10:30AM today. It was found injured in the Kuehnle Marsh not far from its nest about two months ago. Since it didn't have a broken wing, it recovered quickly. Quite a crowd turned out, and I will post a larger album later.

The first eagle in the photos, with the white head, is a 22-year-old blind bald eagle. It was blinded by West Nile Virus about ten years ago. The second eagle, with the brown head, is the eaglet that was released today. 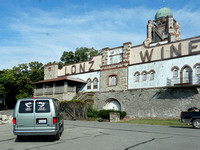